AABB regularly surveys its members for information about blood collection, utilization, and current practices. The AABB survey results are shared with AABB membership, who use them for benchmarking and to better understand the current state of the field. Additionally, AABB uses these data to identify industry trends and to inform AABB’s decision making, planning and policy positions.

AABB is building out a robust data infrastructure to better capture important information about the strength and stability of the blood supply and about the practice of transfusion medicine.

This project was born from discussions about the challenges in evaluating the state of the blood supply, particularly with platelets and group O red blood cell components, due to the absence of reliable data. To identify a potential solution, AABB created a working group that developed a survey instrument to collect basic collection and utilization information on platelet and Group O RBC numbers. The goal is to identify trends in collection, utilization, and to capture the frequency and impact of shortages or of spikes in use on the blood supply.

Below is an interactive report from the survey with basic metrics to identify trends in collection and utilization. We hope that, over time, the survey results will evolve and be an important source of data for AABB members and the larger transfusion community. The more data we collect, the better the information we can provide.

Beginning Q4 2022, we will release the survey invitations quarterly requesting participants to provide monthly data. If a facility is interested in participating, or if there are any questions regarding this information, please contact Srijana Rajbhandary at srajbhandary@aabb.org. 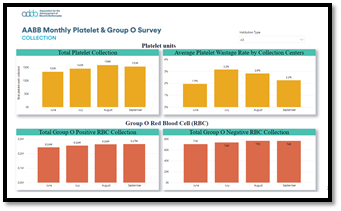