A Short History of Blood Banking

The field of blood banking began in 1616 when William Harvey discovered that blood circulated through the body. In 1665, a transfusion of blood from a lamb was used to save the life of a young patient, and animal-to-human transfusion became common. However, due to the high mortality rate associated with such transfusions, the method fell out of practice until the early 1800s, when various experiments were conducted to perfect this technique. In 1901, a breakthrough was reached when Karl Landsteiner described human blood groups. Landsteiner’s work as continued and expanded in the next decade and, in 1914, sodium citrate was discovered to be an effective anti-coagulant so that blood could be preserved. It was no longer necessary for donor and recipient to be in proximity during the transfusion.

As early as World War I, blood transfusions were being used to save lives in the battlefield. Blood was drawn from healthy servicemen and administered to the wounded. After the war, experiments on stored blood were conducted in Russia by a Soviet scientist, S.S. Yudin, who performed experiments with cadaver blood. These experiments attracted the interest of Bernard Fantus, MD, director of Therapeutics at the Cook County Hospital, Chicago, IL.

Fantus was sure that the collection and storage of human blood for future patient use was possible in a hospital setting. He proposed to administrators of the hospital his idea of establishing a blood collection and storage service. Eventually, through the efforts of Fantus and his colleagues, a grant was procured from a local businessman and the Cook County Hospital Blood Preservation Laboratory was opened in 1937. In its first year of operation, the hospital averaged about 70 transfusions a month.

On April 16, 1947, at 9:12 am, the freighter “Grandcamp” exploded while docked at a wharf in Texas City, Texas. This accident set off a chain of events that led to the foundation of AABB. In a presentation at the Blood Bank Institute, William C. Levin, MD, and L. Jean Stubbins, MT, outlined the treatment of those who were wounded in the explosion, and the effort to find blood for them.

Texas City is less than 10 miles from Galveston, so the explosion victims were brough to John Sealy Hospital and the University of Texas Medical School. “Within four hours of the explosion, 1,888 150cc units of pooled plasma were administered to disaster victims brough to John Sealy Hospital,” Levin and Stubbs recalled. “Fortunately, we had 87 pints of whole blood in the bank at the time of the explosion. This supply was adequate until the first shipment of blood from the Buchanan Blood Center [Dallas, TX] arrived in Galveston. After that, we depended for the next several days on the blood sent to us from Dallas.”

Early on in the emergency, the William Buchanan Blood Center offered to serve as a procurement agency for blood. This offer was gratefully accepted by the John Sealy Blood Bank. The blood was “prepared by the Baylor Hospital Blood Bank personnel, who grouped, Rh typed and ran serological tests on it.” The blood was then sent to us with individuals pilot tubes on each bottle in refrigerated cases by U.S. Navy planes.

Sealy Blood Bank “felt obligated to reject many offers of whole blood from other cities because there were no dependable organized institutions that could draw the blood, group and Rh type it.” The lessons learned from this experience not only strengthened the cooperation between the blood banks in the Dallas area, it awakened the realization that, throughout the nation, many blood banks were in operation. These blood banks heretofore had no way of getting together, of finding out what each was doing, and of standardizing operations. All that was soon to change…

The Formation of the American Association of Blood Banks 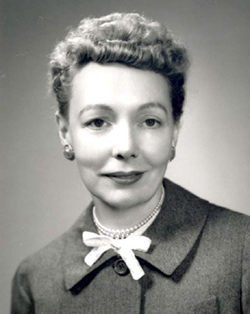 Marjorie Saunders, LLB, administrative assistant at the William Buchanan Blood Center, had been curious about what people in other blood banks were doing. She sent a questionnaire, followed by a more formal survey, to find out. One of the questions she asked was whether blood bankers were interested in joining a national association, to which 78% of the respondents replied “Yes.” The response from the director of the blood centers, Joseph M. Hill, MD, DSc, FASCP, FACP, and the hospital administrator, Lawrence R. Payne, was also “yes” to the idea of sponsoring a meeting, to be called the Blood Bank Institute.

Minutes into the program of the Blood Bank Institute meeting, sponsored by the William Buchanan Blood Center of Baylor Hospital in Dallas, the welcoming speeches halted. Saunders, chairman of the Committee on Arrangements, who was presiding over the historic gathering of delegates, went on with the announcement: “Ladies and gentlemen, I have just been handed a request signed by 68 of you, dated November 17, 1947, which I would like to read: ‘The undersigned urgently request that the Blood Bank Institute seriously consider at the earliest possible moment the formation of an American Association of Blood Banks.’”

Instead of introducing the first presenter of the morning session, Saunders then presided over an impromptu executive session, during which she appointed a Committee on Organization headed by W. Quinn Jordan, LLB, to convene, address the request, and report the results of their work at the business session the next morning. Members of the committee included E. Eric Muirhead, MD; J. Richard Czajkowski, PhD; G. Albin Matson, MA, PhD, AABB’s first president; John J. Andujar, MD; John Scudder, MD, FCAP; and Osborne A. Brines, MD.

The formation of an American Association of Blood Banks was the realization of a dream held by many blood bankers for several years. Blood banks had sprung up across the United States during World War II, and developed independently, working out some of the same problems in different ways, without the help and the guidance of those who were more experienced. Many had expressed a desire to meet with their peers to exchange ideas, procedures, and strategies for the future.

Since its inception in 1947, the Association has grown to represent much more than the "American Association of Blood Banks." The Association instituted a name change in 2005 to reflect its interests and diverse membership more accurately, and is now known only by its acronym, AABB. The name AABB is widely recognized throughout the world as a symbol of authority and distinction. The Association chose to keep these letters to symbolize its strong connection to its history and roots. To help people understand who we are and what we do, AABB adopted the tagline: "A connected community dedicated to advancing transfusion medicine and biotherapies. From donor to patient. From lab to bedside." AABB remains committed to its core objectives to provide high standards of safety for patients, donors and facilities. AABB member institutions displaying the AABB accreditation logo are recognized throughout the world for providing quality products and services.