​AABB’s Standards-Compliant Product Program benefits both vendors and customers by offering assurance that products for the blood community are in compliance with AABB Standards.

Products that achieve AABB’s Standards-Compliant Product recognition have been thoroughly reviewed by AABB and have been confirmed as adhering to the AABB Standards that relate to equipment, process control and document control. 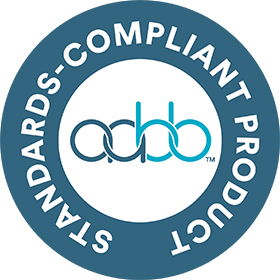 What people are saying:

“Having the ‘AABB Standards-Compliant’ seal will be beneficial for us because it represents that our quality system and technical documentation support AABB standards. The ‘AABB Standards-Compliant’ seal helps communicate in a clear and instantly recognizable way that our primary focus is on quality.
-Colleen Holtkamp, Marketing Manager at Helmer Scientific

“The AABB accreditation is internationally recognized and respected by our customers. Earning the ‘AABB Standards-Compliant’ seal serves as a means to demonstrate our continued commitment to maintaining the highest standards for quality.”
-Maria Menchon, Product Manager at Ashland Specialty Ingredients

Software programs, testing equipment that requires FDA approval with CLIA complexity classification, and supplies outside the scope of the AABB Standards are not eligible for this program.

Please contact AABB’s Accreditation Department at 1-301-215-6492 or accreditation@aabb.org for pricing or any other questions.

Why did AABB develop the Standards-Compliant Products Program?
The program was created to benefit both vendors and those in the field by ensuring that products reviewed are in compliance with the AABB Standards that relate to equipment, process control, document control and deviations.

What must be submitted when applying for the program?
Companies must complete an application and provide the product description, make and model. This must be completed for each product being reviewed.

What if a product is not standards-compliant?
If the product has not been approved as AABB standards-compliant, the reasoning behind this decision will be conveyed to the applicant, who will then have the opportunity to take corrective action.

How long does the process take?
The entire review process is expected to take 2-3 months, although this timeframe may vary depending on type of product, requests for additional information and other factors.

Who reviews the products to determine if they are AABB standards-compliant?
Members of AABB’s Accreditation Department conduct a thorough review of each product submitted to ensure the product is in compliance with the AABB Standard(s) to which it relates.

Which products are not eligible?
Software programs, testing equipment that requires FDA approval with CLIA complexity classification, and supplies outside the scope of the Standards are not eligible for this program.

Where can additional information be found?
Please contact AABB Accreditation Department at 1-301-215-6492 or accreditation@aabb.org for pricing information or other questions.